2nd wine of the icon Sassicaia.

Type of soils: various morphological and composite characteristics, with a strong presence of  calcareous areas, rich in limestone, marlstone and gabbro stone, as well as pebbles and also partially  clay. Located at an altitude between 100 and 300 meters above sea level, with exposure West/South-West.

Climatic trend and characteristics of the vintage:

After a rather mild and dry autumn, winter temperatures dropped a lot, helped by the cold north winds.  This period was characterized also by lack of rain, except for a few rainy days in February. Since the beginning of March, the beautiful sunny days and the substantial increase in temperatures  anticipated the budding. However, temperatures dropped again in April, when the long-awaited rains  arrived. It is thanks to these spring rains that it was possible to re-establish the water reserve of the  subsoils. Two short hailstorms during two days in April thinned the shoots and slightly reduced the  amount of production, especially for the more precocious Merlot. The continuation of spring was also  somewhat unusual, as it was characterized by temperatures below the seasonal norm and persistent  rains, accompanied by north winds. This climatic condition has kept the agronomists and country staff  very busy. It also has affected the vegetation by delaying the growth of the shoots and consequently,  also the flowering. Around mid-June, good weather arrived, with mild temperatures, sunny days and  intense ventilation. A perfect condition for the phenological phases of the vine. Flowering was slightly  delayed to May, and took place in optimal conditions with no winds. The result was an excellent,  regular and complete fruit set.

Some Merlot vineyards were affected by millerandage. The fairly loose bunches were well aerated, to  the benefit of the growth of the berries and subsequent ripening.

June was characterized by high temperatures, with daytime temperatures often even above 40 ° C.  Luckily this intense heat did not last for a long time. In fact, a rainy turbulence occurred at the  beginning of July, bringing refreshment to the vines and re-establishing the underground water  reserves. August was quite hot but with temperatures that have always remained in the seasonal  average. After mid-August, some rains brought refreshment and prevented any risk of water stress to  the plants. The phenolic ripening of the grapes took place about 6-7 days later than in

the previous years. Especially for the Merlot, that could hang longer on the vines, compared to the last  10-15 years. This enabled a full and complete ripening.

The harvest began in the first days of September with Merlot, starting from the vineyards located in  the plains, followed by those located on the hills. The harvesting of Cabernet Sauvignon started  towards the middle of September. The harvesting operations of both varieties ended between the last  week of September and first days of October. Grapes were healthy, well pigmented, crunchy.  Excellent extraction in young musts, which from the first days of fermentation have highlighted a  good concentration and extract. The sugar levels were quite high and this resulted in a higher alcohol  content than in previous years. Nonetheless the alcohol content is not too much felt on the palate,  thanks to the elegance of the tannins, which are well ripe, integrated and velvety. This is also  supported by a good balanced acidity, which makes the wine approachable and pleasant to drink, even  at a young age. Compared to the 2018 vintage, for obvious reasons of climatic conditions that affected  the vintage, Guidalberto 2019 stands out for its great complexity (average extract 34 gr /liter),  aromatic component, maturity of tannins and balanced acidity. All of this combined, suggests a great  aging potential for this wine.

The manual harvest began with Merlot in the very first days of September, continued with Cabernet  Sauvignon and was completed by the first days of October.

Manual sorting of the bunches in the vineyards during harvesting and subsequent selection of the  grapes, bunches and berries upon arrival in the cellar, using a sorting table.

Soft pressing and de-stemming of the bunches to avoid the pressure of the grapes and excessive  release of tannin.

Alcoholic fermentation carried out in stainless steel vats at a controlled temperature, maintained  around 26-28 ° C, without any addition of external yeasts.

The maceration of this vintage lasted about 13-15 days for Merlot grapes and 15-18 days for Cabernet  Sauvignon grapes, with frequent pumping over and délestage, to obtain more balanced musts, favor  aromatic extraction and make the tannins more delicate.

The malolactic fermentation, which began in early November, was also completely carried out in steel  vats, at the end of which the musts were put in wood (barrique) for aging.

Upon completion of the malolactic fermentation, the wine was placed in French oak barriques and  20% of American oak barriques, for a period of 15 months. Subsequent fining for 3 months in glass before release. 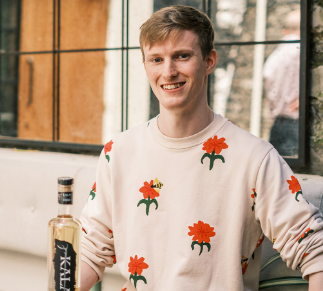 Superb 2nd wine of the iconic Sassicaia....I'd love to go to Tuscany soon!